Growing awareness on climate change has created an increasing interest to observe concentrations of gases contributing to the warming of the climate. A specially effective way of doing this is to observe this from space, as this enables to an excellent spatial coverage of earth on the flight path of the satellite. Necessary technologies had been unlocked and thus a joint co-operative was launched to create a sensor suitable for the task.

Interferometric monitor for greenhouse gases (IMG) is a satellite born sensor based on FTIR developed in co-operation by JAROS, NASDA and NASA. IMG measured upwelling infrared radiance at fine spectral resolutions. The instrument was designed to have a very high spectral resolution (0.05 cm).The sensor will obtain very accurate spectra of of the thermal infrared radiation from the atmosphere and this data can be used deduce concentrations of greenhouse gases and water vapour.

The two major steps in the process are interferometry and Fourier Transform Infrared Spectroscopy (FTIR).

Interferometry is a study of wavelenghts, light and interference (Hence the name). The usual component to study is electromagnetic radiation.  Waves are superimposed, meaning they are manipulated in a way to give some meaningful analytical results. Usually light is used as the source of the electromagnetic waves.

The basic principle of a Michelson-interferometer: A light is introduced into the system and it is mechanically manipulated with mirrors (figure 2) to travel two different paths. The paths are then guided to meet at a point (detector). The difference in the path travelled creates an interference pattern and this pattern can be studied and interpreted in the Fourier Tranform Infrared Spectroscopy. This yields e.g.  a refractive index which can be purposefully understood.

A schematic of a Michelson-interferometer

FT-IR is the prevalent method for infrared spectroscopy. It has replaced the dispersive infrared instruments.

Infrared spectroscopy is used for identifying one material from another. The semiconductors in the system react differently to different wavelengths. It is based on the fact that every material has a unique combination of atoms; therefore, it is impossible to get the exact same infrared spectrum from two different compounds. The spectrum of the light analyzed is missing some wavelengths that are absorbed as energy in the molecule level of the compound. This gives each material a distinctive feature in the spectrum.

The infrared spectrum of a material consists of absorption peaks corresponding to vibration frequencies present between the bonds of its atoms. The size of a peak indicates the amount of material present, in other words the concentration of the substance..

The need for FT-IR was felt because of the limitations of dispersive-type instruments. The major problem with the older technology was that the scanning process was slow. There was a need for a process that could simultaneously measure all infrared frequencies rather than measuring one frequency at a time.

The signal produced by an interferometer is unique in the sense that it contains all infrared frequencies. Measurement of the signal is quick, typically, requiring a second or so. Therefore, the time required for processing a signal is reduced to a few seconds instead of many minutes.

In order to make identifications, the analyst will need a frequency spectrum (plotting of intensity value for each frequency value). This information is not provided by the measured interferogram signal. In order to get the individual frequencies, the measured signal needs to be “decoded.“ The decoding process is where Fourier transformation (a mathematical process) is utilized.. A computer performs the transformation and presents the required spectral information for analysis. 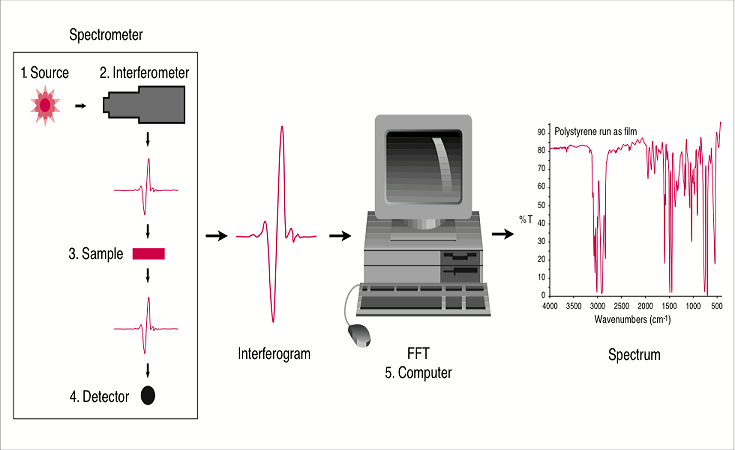 To establish a relative scale against which all measurements can be compared, measurements are taken without any sample in the beam. The comparison with relative scale gives the “percent transmittance.” This technique produces a spectrum which eliminates all  instrumental characteristics from the data. Thus, the spectrum seen is produced solely by the sample.

The detectors are housed in the IR-detector below the cooling unit. There are three detectors, each corresponding to three different spectral channels.

The sensors are cooled with the cooler to a temperature of below 80 K.

The incoming light beams are splitted into different wavelengths and reflected into the IR-sensor and then the different semiconductors absorb them in their rispectable operating wavelengths. These portions of the reflected beam power electrons to move onto the the next conduction band, thus causing that particular semiconductor to produce a current. This current is then registered and analyzed.

The sensitivity of the IMG varies according to the wavelength. Some differences in ground tests and on board tests were caused by unexpected changes in sensitivities. The longer wavelength limit was estimated to be 14.3 µm but it was extended to 16.6 µm, which might explain the differences in the tests. The change in sensitivity might have been caused by the lower temperature of the detector. Figure 4 shows the spectrum obtained from the IMG.

Not only will it tell you what functional groups, bonds and structural elements are there, it will also clarify which ones are not there. For example in this spectrum (figure 4) the cluster of peaks below 3000 cm‐1 down to around 2850 cm-1 are the peaks from the stretching of sp3‐hybridized
C‐H bonds. Therefore this particular molecule must contain regular alkyl chain carbons, which would suggest an alkane structure. The lower wavenumbers are not distinguishable in all spectra so they can be neglected.

The IMG is able to detect and monitor the vertical and spatial distribution of many greenhouse gases, such as CO2,CH4 and O3, through its spectrometer. Its wide range covers the infrared spectrum from 3.3 to 15 µm with a very high resolution of 0.1 cm-1.

The detectors of the IMG are cooled to under 80 K with a Stirling-cycle cooler. The actual temperature may vary according to the thermal condition of the spacecraft. The vibrations caused by the cooler compressor are absorbed through a suspension mechanism. The expected lifetime of the cooler is 25000 hours, about 3 years.

The adjustment of the scanning mirror plays a large part in the accuracy of the results. A misalignment of the interferometer can be fixed by simply adjusting the angle of the mirror.This results in an accuracy of 0.0001 degrees over the entire scanning range.

The IMG also is able to measure the temperature and humidity in the troposphere with high accuracy. The retrieval accuracy has been found to be 1 K for temperature and water vapor concentration from 10 to 20%. These measurements are 2-3 times more accurate than satellite-borne radiometers used presently.

Detection and monitoring of the vertical and spatial distribution of:

The two most famous applications of IMG have been the greenhouse gas monitoring satellites ADEOS 1 and 2. Both of these missions are now finished. In general FT-IR is vastly used in a variety of fields. The applications are numerous because FTIR is greatly faster and more comprehensive than the old dispersive systems. It can analyze gas, liquid or solid.