A general working method of infrared sensors is as follows: 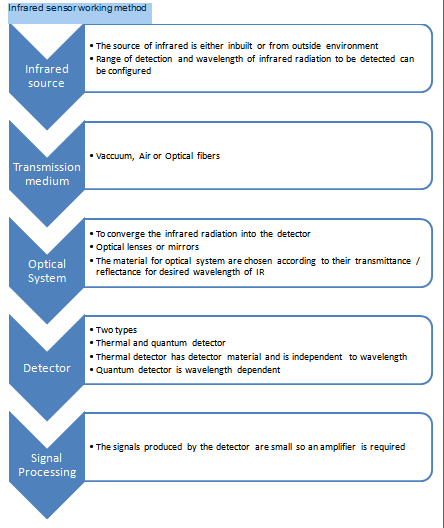 The detector performance is based on to following parameters:

It is the output voltage per watt of incident energy in absence of noise.

A simple circuit for obtaining output voltage(signal) consists of a current source, photodetector(dark resistance), a resistor and a voltage output.

In the circuit when radiation strikes the resistor Rd then its resistance changes consequently changing the voltage output Vo.

D*: It is the photosensitivity per unit active area of the detector. Therefore, higher D* means better performance.

Noise Equivalent Point(NEP): Noise is caused by the background radiation and it affects the signal output. NEP is the amount of incident radiation when the signal to noise ratio is 1.

-There are two types of infrared sensor based on its function:

-These are the types of infrared sensors based on the working mechanism:

Active infrared sensors are the types of infrared sensor that emit infrared radiation which is later received by the receiver. The IR is emitted by a IR Light Emitting Diode (LED) and received by photodiode, phototransistor or photoelectric cells. During the process of detection, the radiation is altered, between process of emission and receiving, by object of interest. The alteration of radiation causes change in received radiation in the receiver. This property is used to generate desired output with help of associated electronic circuit.

There are two types of Active infrared sensors

These types of Active IR sensor have emitter and receiver placed in such a way that the IR emitted by the emitter falls directly in to the receiver. During the operation, IR beam is emitted continuously towards the receiver. The flow of IR can be interrupted by placing an object between the emitter and receiver. If the IR is transmitted but altered then receiver generates output based on the change in radiation. Similarly if the radiation is completely blocked the receiver can detect it and provide the desired output. For example: let’s consider a Break beam sensor and a conveyer belt as shown in figure. When an opaque object interrupts the IR flow the receiver doesn’t receive any signal thus the conveyer belt stops. 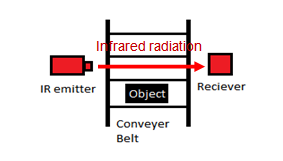 Furthermore advanced use of these types of sensors can be to acquire different shape and surface profile of objects.

These types of sensors use reflective property of IR. The emitter emits an IR beam which is reflected by the object. The reflected IR is the detected by the receiver. The object causes change in the property of the reflected IR or the amount of IR received by the receiver varies. The degree of change is dependent on the reflectance of the object. Thus detecting the change in amount of received IR helps in figuring out the properties of object such as surface geography and reflectance.

The infrared sensor has its detecting area. Multizonal Fresnel lens array is associated covers the pyroelectric transducer. This lens is Plano convex lens that are designed to collect the infrared radiation from the different spatial zones.Fresnel lens are made up of material that can transmit infrared range of 8µM to 14µm. This lens dose not view the space in continuous fashion, the detection pattern of sensor is fan shaped .It views as a discrete beams or cones.[4] 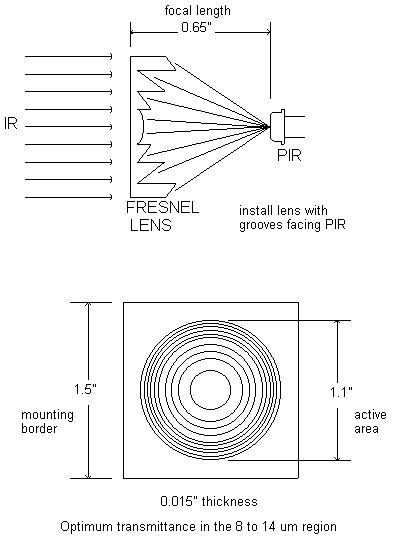 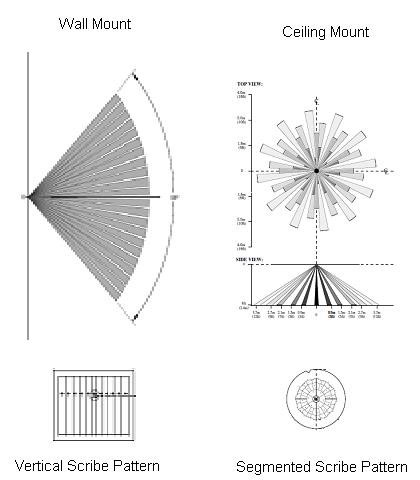 Figure 5 :detection pattern of the sensor

The gap between the cones increases with the distance and it  is inversely proportional to the sensitivity of the sensor. 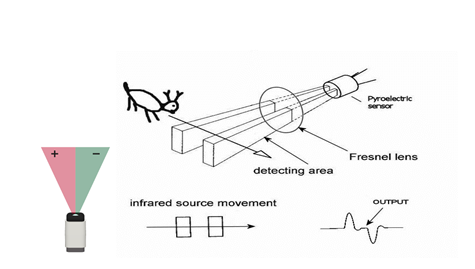 The radiation strikes pryoelectric films that are made of lithium tantalite. It is dielectric (insulator) in nature so its surface area charges when it is strike by radiated infrared. It has electrodes which gather the charge. The produced charge is measured with FET (Field effective transistor) device that is inbuilt in sensor. Among 3 pins in the FET pin 3 is grounded about 100k and pin 2 is feed into a stage amplifier having signal condition circuits.

The amplifier avoids the high frequency noises above 10Hz.  The signal produced is in the range of 1mVpp that is a small voltage around a DC signal. The power source of 3 to 15 volt is required for the FET supplied through Pin 1.Externtal resistor is connected to pin 3 and pin 2 which converts the FET current to voltage. Pin 2 of a FET is followed by Amplifier and comparator. To improve the accuracy of sensor dc offset (dc offset is an undesirable character, it causes waveform not to be 0) is eliminated by PIR incorporation of ac-coupled amplifiers. Comparator is an extremely sensitive device comparing the voltages or currents and gives outputs a digital signal which is larger.[2][3] 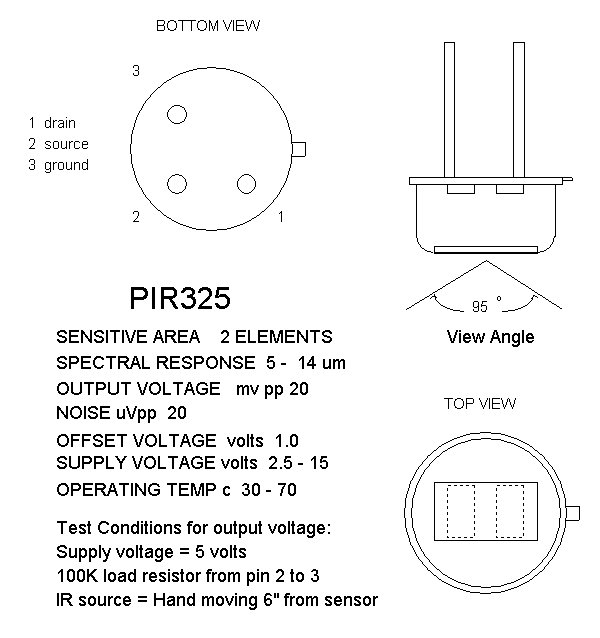 The signal from the FET is amplified and the Amplifier 1 provides gain (gain is a unit less measure of the ability of an amplifier to increase the amplitude of a signal from the input to the output) and the signal is buffered in a signal adapter and it is passed to the Amplifier 2 to provide another gain. Ratio gain in staged amplifiers is multiplied. Then the signal is fed into the A/D converter (Analog to Digital converter) it converts the analog voltage signal into binary signals and the binary signal encodes the analog input as a result the output is in digital number.[7]