This article is being written to give a brief and good concept regarding Oscillatory motion, Simple harmonic motion(SHM)and there few examples. In our everyday life we come across different things in which we see these phenomenon taking place so let's go through these topics.

Here in fig 1.1 we can see two quantities that describes the oscillatory motion; Amplitude is the maximum displacement from equilibrium, and period is the  time it takes for the motion to repeat itself. The other way to express the time aspects is frequency, or number of oscillation cycles per unit time. Frequency f and period T are complementary ways of conveying the same information, and mathematically they're inverse: 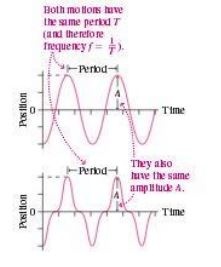 Frequency is measured in hertz (Hz), and one hertz is equal to one oscillation cycle per second.

fig 1.2 A mass attached to a spring undergoes SHM