For our final review in modern physics course, we had to choose between some topics regarding the course material, therefore, I selected following initial questions to work on my report.

I will start by giving my opinion about laser technology, and suggest the applications of such technologies based on the devices and applications I encountered and briefly describe my beliefs about the invention of such practical technology.

In my opinion, the laser technology comes from focusing photons of lights on a single spot and such approach makes it more powerful than a beam of light. In addition, I heard many times that it is dangerous to point out a laser dot in someone’s eye.

Furthermore, as we learned about LEDs and that recently blue LED got invented, now that I think about it, I assume I have never seen a blue laser, although I’ve seen red laser and in few cases green laser. Therefore, I assume lasers and LEDs must have a very similar structure for that reason. (additional question: why blue laser was the last one to be invented, if it got invented, and is it similar to LED concept and reason?) I also assume practically it is harder to create green laser comparing to red ones, since, red light laser devices are much more and cheaper comparing to green ones. (additional question: why is it more difficult and more expensive to create green laser comparing to red ones?)

In computer industry there are several devices which I encountered that they were using laser technology to function. The reason for selecting such technology were three main reasons. First, the reason was to show a laser light and show a certain spot in places, such as presentations. Second, the reason was to use this technology as a method to navigate through surfaces to understand movement, for instance, laser mouses. Third, the reason was to emit a laser light and by receiving that certain laser understand the data, for instance CD ROMs and DVD ROMs that they emit a laser beam and it hit the surface of a CD or a DVD then it reflects to a receiver looking like an eye and it determines if the data was 0 or 1. (additional question: how optical drives read data?)

In health related topics, lasers had great impact. By using lasers scientists and doctors are able to point out to cancer cells to destroy them and sometimes they do not need to cut the patient's body in order to apply their surgery in cases that cutting may create other disease and in some parts may not even be possible. (additional question: how scientists may use lasers to go through humans tissues and work with an inner organ?)

To shape, and cut strong matters sometimes in related fields they use laser.

In robots you may also encounter the applications of laser. Sensors may detect laser beams and by using them they can calculate distance. Robots can point out a laser beam from its sender and by using image processing the receiver may determine the diameter of such beam and calculate the distance of the robot from the other objects and surfaces. (additional question: how in robotics you may use laser to determine the distance of the robot from another object?)

Lasers are very interesting and amusing objects, therefore, we even may see their applications in toys for children.

We know that factors like heat can change the physical and chemical state of the compound.

What we need to find out more?

How could we improve my explanation?

What do you not understand or know yet about this topic?

“Laser” is an acronym for Light Amplification by Stimulated Emission of Radiation.

A laser is effectively a machine that makes billions of atoms pump out trillions of photons all at once so they line up to form a really concentrated light beam.

A red laser contains a long crystal made of ruby with a flash tube surrounding it. The flash tube is similar to a fluorescent strip light, only it's coiled around the ruby crystal and it flashes every so often like a camera's flash. 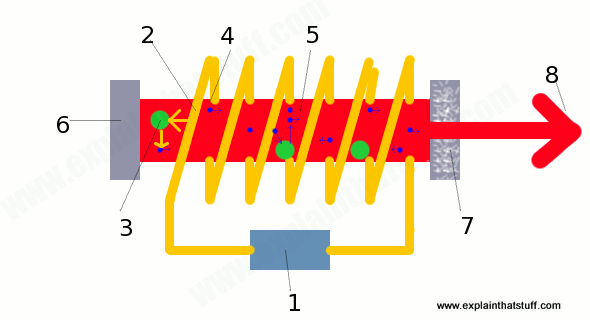 How do the flash tube and the crystal make laser light?

How is laser light different from ordinary light?

Much more concepts relies on lasers other than being just powerful flashlights. The difference between ordinary light and laser light is somehow difference between ripples in your bathtub and huge waves on the sea. When we move our hands and create waves in the bathtub they keep being stronger and stronger. Imagine you be able to continue this process as much as you be able to create waves as huge and as strong as ocean waves. In this concept, a laser does something similar with light waves to make them much stronger than ordinary light waves. [1]

Based on the medium you use, type of lasers may be varied. And they will be available for research, medical, industrial, and commercial uses.

Gas lasers (helium and helium-neon, HeNe, are the most common gas lasers) have a output of a visible red light. 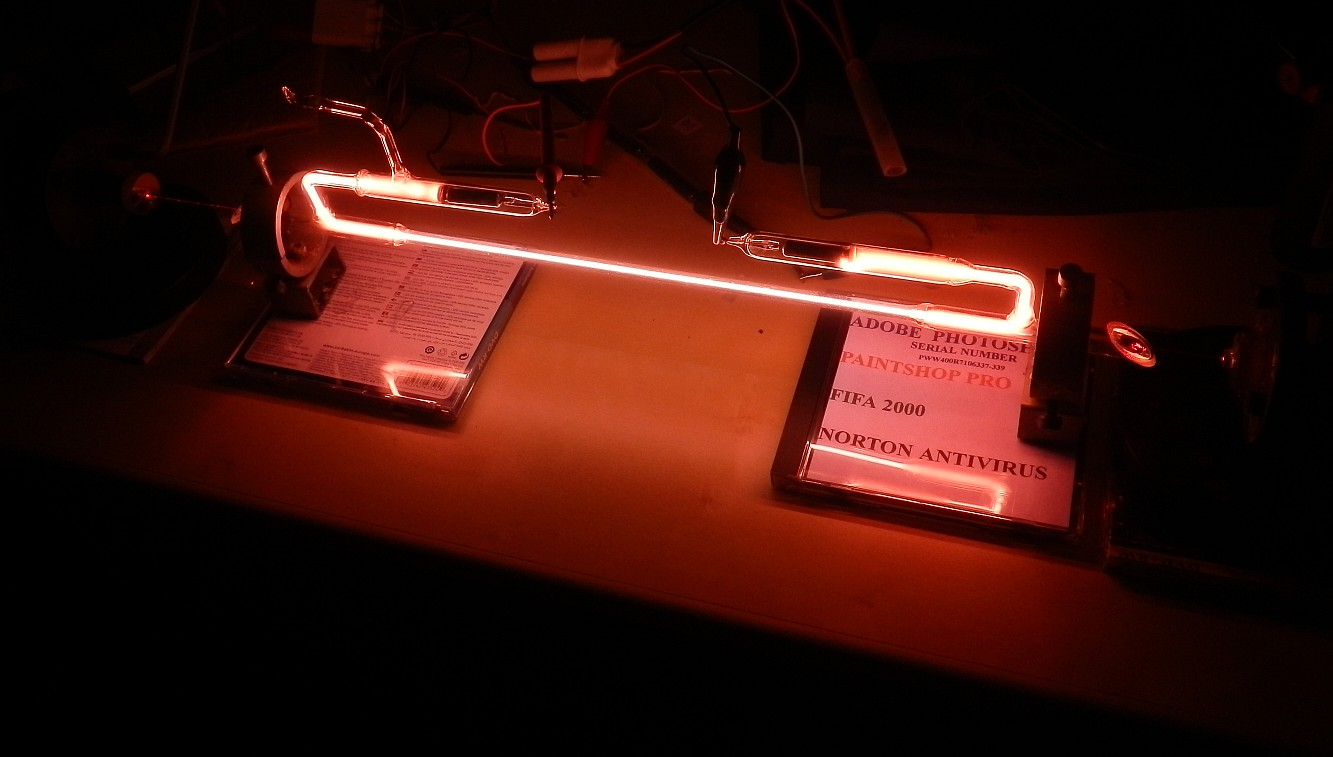 Excimer lasers use reactive gases such as chlorine and fluorine mixed with inert gases such as argon, krypton, or xenon. They produce light in the ultraviolet range.

Dye lasers use complex organic dyes like rhodamine 6G in liquid solution or suspension as lasing media. They are tunable over a broad range of wavelengths.

Semiconductor lasers (diode lasers) are not solid-state lasers. These electronic devices are generally very small and use low power. [2] 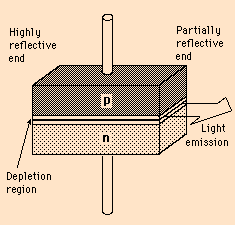 Here are the list of the applications of laser: [3]

The highly collimated beam of a laser may be further focused to a microscopic dot of extremely high energy density. This concept makes it useful for cutting and cauterizing instrument.

The highly collimated beam of a laser may be further focused to a microscopic dot of extremely high energy density for welding and cutting.

For instance, the automobile industry makes extensive use of carbon dioxide lasers with powers up to several kilowatts for computer controlled welding on auto assembly lines.

Helium-neon and semiconductor lasers have become standard parts of the field surveyor's equipment. A fast laser pulse is sent to a corner reflector at the point to be measured and the time of reflection is measured to get the distance.

Computer controlled laser garment cutters can be programmed to cut out 400 size 6 and then 700 size 9 garments. The usefulness of the laser for such cutting operations comes from the fact that the beam is highly collimated and can be further focused to a microscopic dot of extremely high energy density for cutting.

Telephone fiber drivers may be solid state lasers the size of a grain of sand and consume a power of only half a milliwatt. They can sent 50 million pulses per second into an attached telephone fiber and encode over 600 simultaneous telephone conversations.

The laser printer has in a few years become the dominant mode of printing in offices. It employs a semiconductor laser and the xerography principle. The laser is focused and scanned across a photoactive selenium coated drum where it produces a charge pattern which mirrors the material to be printed. 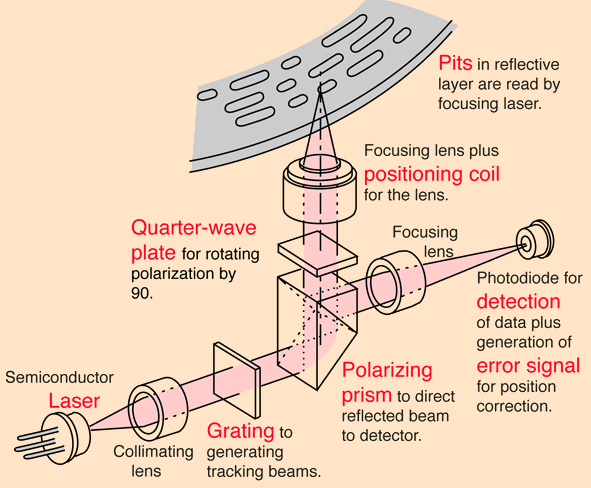 Laser spectroscopy has led to advances in the precision with which spectral line frequencies can be measured, and this has fundamental significance for our understanding of basic atomic processes.

Heat treatments for hardening or annealing have been long practiced in metallurgy. But lasers offer some new possibilities for selective heat treatments of metal parts.

Supermarket scanners typically use helium-neon lasers to scan the universal barcodes to identify products. The laser beam bounces off a rotating mirror and scans the code, sending a modulated beam to a light detector and then to a computer which has the product information stored. Semiconductor lasers can also be used for this purpose.

Starting in about 1985 with the work of Steven Chu and others, the use of lasers to achieve extremely low temperatures has advanced to the point that temperatures of 10-9 K have been reached.

Lasers are powerful beams of electromagnetic radiation. Laser beams can be made from visible light, x-rays, ultraviolet light or infrared light.

Based on the medium we use to create such beams, we create several laser types such as solid state lasers, gas lasers, excimer lasers, dye lasers, and semiconductor lasers.

Because of lasers applications research in this field is really essential and vital to the other field of science and such aspect made this topic a very practical and important topic.